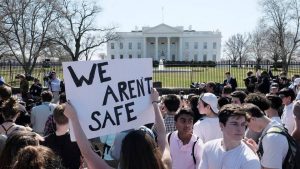 *This article originally appeared in the Charlotte Observer

One day after last week’s horrific gun murders of 17 students and staff at a school in Parkland, Florida, NC state representative Larry Pittman revived his plan to prevent school shootings by equipping teachers with guns, saying, “We have to get over this useless hysteria about guns and allow school personnel to have a chance to defend their lives and those of their students.”  Just days later, President Trump echoed the sentiment, suggesting schools train and arm teachers to prevent attacks by “maniacs” who are emboldened by gun-free zones.  Trump pledged federal funding for such an effort and said that teachers who agree to carry guns should receive bonuses.

The argument follows the standard NRA line we hear after nearly every school shooting, that “the only way to stop a bad guy with a gun is a good guy with a gun.”  It also protects the interests of a gun rights organization that spent $11 million supporting Trump’s presidential campaign as well as the bottom line of a $50 billion firearms industry.  However, an endorsement of the outlandish idea of arming teachers from the highest office in the land is something new.  It would be laughable if it weren’t so dangerous.

According to FBI statistics, in 2016 there were more than 11,000 criminal gun homicides in the United States.  Only 276 justifiable gun killings by private citizens occurred over the same period.  In other words, 2016 saw forty gun murders for every single case where someone used a gun to kill a bad guy in self defense–this in a country with 300 million firearms.  Perhaps even more alarming for educators who may soon be asked to carry a gun are the 2,203 unintentional shootings that took place that year.

Teaching in a classroom with 30-40 lively children is always an exercise in controlled chaos.  The data indicates that the risk of one of those children being shot accidentally is much higher than the possibility an armed teacher will successfully shoot an intruder.  What’s harder to gauge is the likelihood that a disturbed student who needs help we aren’t currently providing will snatch the teacher’s gun and use it on classmates or staff.

Industry standards recommend ratios of 1:250 for both school counselors and social workers who serve our children.  In school year 2016-17, North Carolina’s students were supported by counselors at a ratio of 1:355 and by social workers at a ratio of just 1:1447.  The suggested ratio of psychologists per student is 1:500.  Last year our ratio was 1:1829.  How many of the school shootings we’ve witnessed recently could have been prevented had we done a better job of creating healthy school environments and aiding students in emotional distress?

Gun violence in America is extremely complicated and comes with no single solution.  Giving teachers guns would undoubtedly make this grave crisis even worse.  Our approaches to school shootings must not be driven by legislators’ action movie fantasies or by their loyalty to lobbyists.  We must ensure that school resources provide sufficient social and emotional care to students who desperately need it.  Doing so will be one vital step toward avoiding such unspeakable tragedies in the future.