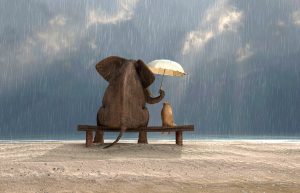 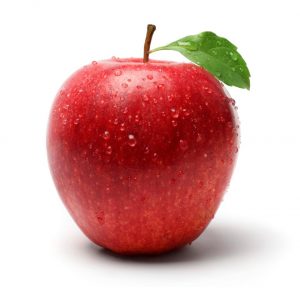 Last week when my article about turning hate mail into a teachable moment for my students was published by the Washington Post, I sent a link to the individual who had initially contacted me.  I included a brief message which said only, “You’ll be glad to see that your email ended up doing some good.”

Considering the caustic beginning to our communication, I expected either more insults or perhaps silence.  Imagine my surprise when I received this reply instead:

I’m honestly thrilled. Thank you for sharing. That’s good stuff and the more I learn about you and your efforts, the more I wish we had more folks like you that take the time and effort to have this kind of dialogue.

Your students are spot on. I apologize for the insults and my email was obviously in haste and over emotional.

I respect what you do and even though I doubt we’ll agree on this issue (I still think the bad guys will avoid schools in which they fear a salty armed forces veteran is on duty) I greatly appreciate your point of view.

My sincerely apologies for the insults, you deserve better for what you do for the community.

I hope you and your wonderful and thoughtful students forgive me!

It appears that Kevin took the last piece of student advice he read to heart:

“He can have a way better attitude, and be a lot nicer.  So that way he can earn more respect and also be a better person.”

In an era of bitter political polarization, it’s nice to see evidence that a positive, measured approach still works.

*You can see the WCNC story about this experience here 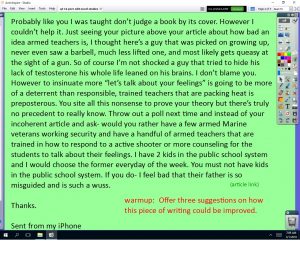