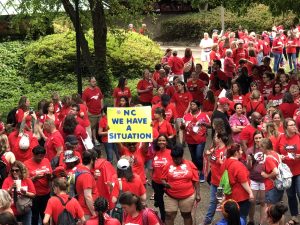 My favorite sign from today.  Simple, funny, profound, and so accurate.

I have never seen anything that comes close to the awesome display of teacher power that happened in Raleigh today.  Thousands upon thousands of teachers from every corner of our state converged on the state capital to send a clear message to our legislators that we’re putting our foot down and demanding that they give public education the funding it deserves.

I stood in line outside the legislative building with a bunch of new friends for more than two hours.  We finally got in and up to the chambers at about 12:30.  Outside the chambers, teachers were pressed up against the glass with their signs, giving lawmakers on the floor their best “you’ve been naughty” teacher looks.  The galleries were completely packed with teachers, so full that nobody was allowed to enter until someone else came out. 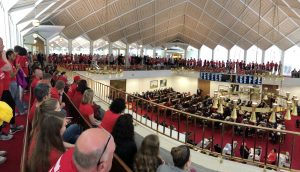 I was fortunate enough to get inside and spend about 15 minutes watching the House of Representatives in action.  Outside the teachers got louder and louder, clapping and chanting, “Remember!  Remember!  We vote in November!!” over and over.  At times the Speaker of the House had to stop talking because he could not be heard.  Absurdly, the House carried on inane business as usual, with members giving shoutouts to their fraternities and one taking the time to remind her colleagues how important it was to regularly check their blood pressure (actually pretty good advice for today).

While I was watching all this unfold, I got a message from someone at WBT Radio in Charlotte, asking if I’d be willing to speak by phone on a radio program.  WBT is a conservative talk radio show which airs the Pat McCrory Show, Rush Limbaugh, etc.  I wondered at first if it might be some sort of ambush, but I agreed to do it.

You can listen to the segment below if you’re interested–it was not an ambush and actually turned out to be a good platform to air some of the concerns we all brought to Raleigh today.  But I was struck by the question that I heard from the host and also heard from so many other members of the media today:  What now?

I think they’re asking the wrong people.  I think that North Carolina’s teachers delivered a very clear message to state lawmakers today.  Now it’s time for them to decide whether they want to do their jobs.