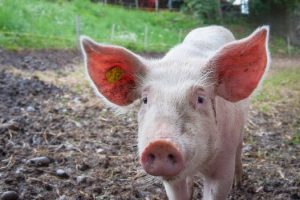 Earlier this month, more than 20,000 North Carolina teachers marched through the streets of Raleigh, demanding state legislators increase support for public education.  One of the things those teachers were asking for was more funding for classroom supplies. After all, budget cuts by the General Assembly have reduced allocations for supplies and materials 55% since peak levels in 2009-10.  Many teachers work part time jobs to be able to purchase items needed to provide their students with a top notch educational experience, often spending thousands of dollars of their personal funds each school year.

At least one state senator appears to have been listening.  Sort of.

When this year’s budget bill went online last night, it included $200,000 for classroom supplies as a grant-in-aid to Donors Choose, an organization that teachers routinely use to solicit public donations to purchase needed classroom materials.  But, interestingly enough, this money will only be available to educators who work at schools located in Senate District 41. 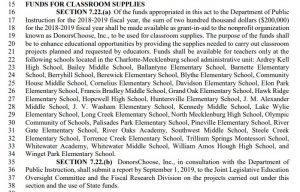 As it turns out, Senator Jeff Tarte, currently in a very competitive race for reelection against Democratic challenger Natasha Marcus, recently asked CMS Government Relations Coordinator Charles Jeter for a list of schools in his newly drawn district.

While there are some high poverty schools in Tarte’s district, many of the 35 schools that will share this $200,000 lie in some of the wealthiest areas of Mecklenburg County, including Ballantyne and Davidson.  Those schools in many cases have high-powered PTSAs with well-oiled annual fund-raising operations that budget specifically for teacher supply needs. They are able to make up the shortfall for what the state fails to provide.

It’s also worth noting that Donors Choose charges fairly hefty overhead fees.  I recently got a set of 80 novels funded on Donors Choose.  As you can see, nearly 20% of the project cost went to processing fees, mysterious ‘materials,’ and a large ‘suggested donation’ (It is possible for donors to opt out of the suggested donation but the process is somewhat counter intuitive).  It’s fair to ask whether this is a responsible use of taxpayer dollars. 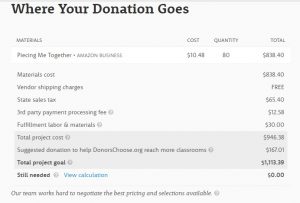 Apart from handwringing, there doesn’t seem to be much that can be done about this inequitable distribution of resources.  This year’s budget adjustments were fast-tracked in such a manner as to deliberately avoid debate and amendments, so it appears Tarte’s egregious pork barrel spending is a done deal.

Make no mistake, schools need more supplies.  But our legislators need to provide those resources starting where they are needed most, not just dole them out in their own districts in return for votes.  They need to support public education simply because it’s the right thing to do.