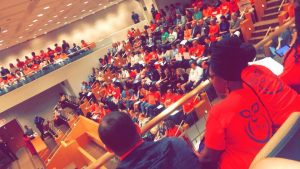 On May 16, more than 20,000 teachers, including many of the people you see in this room, filled the streets of Raleigh to ask state legislators for two things: respect and support for public education.

The very next day, our county commission met with CMS’s board and administration to talk about CMS’s proposed budget, and both of those things appeared to be in short supply.  During that meeting I heard accusations of irresponsibility and excess leveled at our school district. So I wanted to come here tonight just to let you know that what we’re asking for are real, legitimate needs.

We need additional support services staff, and I appreciate the county manager’s recommendation that the positions we’ve asked for there be funded.  What we’ve requested still leaves us far short of recommended levels, but it’s a step in the right direction.

The other CMS needs I want to talk about are among those left out of the proposed 2019 county budget.

We need to add 20 teachers of English learners just to keep up with a projected increase in enrollment of students who are not fluent in English and give those students the best opportunity at success.

We need to expand AVID, a program which works to close the opportunity gap by preparing students from groups that are traditionally underrepresented in higher education for success in college and beyond.

Finally, let’s talk about why increasing the local supplement is a need.  The local supplement for teachers hasn’t been increased in 6 years. Over that same period, state pay raises have struggled to keep up with inflation and health insurance costs have steadily risen.

Last week I spoke with a third year teacher at McClintock Middle.  In addition to his full time teaching job, he works at Panthers and Hornets games, delivers groceries, grades tests for Pearson, and manages a trampoline park.  He works 65 hours a week to make ends meet and be able to continue teaching and serving the children of Mecklenburg County. And his case is not that unusual.

As a 3rd year teacher, his full time teaching salary is less than that of a county commissioner.

The increase in local supplement proposed by CMS would represent about a 1% increase to overall pay.  I’d argue that’s not excessive, it’s a need.

Two years ago, the county commissioner salary including allowances went up 43%.  This year’s proposed budget calls for a merit increase which would add up to 4.5% more to that salary.  Let me reiterate, CMS is asking for 1% for teachers.

I understand the state bears a lot of responsibility in North Carolina for funding public education, and they’re not doing a great job.  We’re working on that, and we’ll continue working on that between now and November. And we will show up in November.

But here in Mecklenburg County we also need to feel the respect and support of a county commission that is fully behind our school system.  I urge you to show that respect and support on June 19 by voting to fully fund the needs that CMS has laid out in its proposed budget.