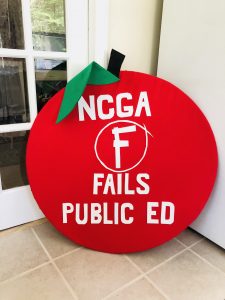 *note:  a version of this article first appeared in the Raleigh News & Observer

When the General Assembly’s short session began last month, proponents of public education were eagerly waiting for lawmakers to take up a proposed $1.9 billion school bond for inclusion on November’s general election ballot.  The bond was the result of a broad grassroots effort which mobilized after the NC Department of Public Instruction’s 2015-16 Statewide Facility Needs Survey identified $8.1 billion in capital needs.  It also followed the subsequent passage of a class size mandate which will soon require many additional classrooms across the state but provides no funding for those classrooms.

Despite rank and file support in both parties and in both chambers, the Public School Building Bond Act of 2017 was rejected by a powerful Senate gatekeeper with a corner office on Jones Street.  Phil Berger’s move to block the public from determining whether it’s in our children’s best interest to relieve overcrowding and renovate crumbling schoolhouses is just the latest example of our state distancing itself from its constitutional duty to ‘guard and maintain’ public education and requiring counties to carry more of the burden for funding it.

Though the school bond has been derailed, a constitutional amendment to cap NC income tax at 5.5% which is supported by the Koch Brothers’ advocacy group looks likely to added to the November ballot.  If the measure passes, any efforts to increase school funding in the future will rely chiefly on sales tax increases, which disproportionately impact low-income taxpayers.

Other constitutional amendments proposed by GOP lawmakers appear to be a bald-faced attempt to drive conservative voters to the polls and stave off a looming threat to the Republican supermajority due in part to the absolute clown show in the Oval Office.  (Berger himself faces a challenge by former 3rd grade teacher and current UNC-Greensboro professor Jen Mangrum, whose most recent internal poll found that 49% of voters in Senate District 30 thought it was time to elect someone new, vs. 37% who felt Berger should be re-elected.)

One measure would require photo ID of NC voters, despite last year’s State Board of Elections finding that only one out of nearly five million votes cast in the 2016 general election would have been prevented by such a law.  Another would “forever preserve” the rights of North Carolina residents to hunt and fish, but actually would change nothing in the law.  On the other hand, public education propositions bring Democratic voters to the polls, and that’s very likely one reason the bond was ultimately denied.

North Carolina residents deserve to be represented by those who put the needs of our children ahead of their own accumulation of wealth and power.  This month, a poll by the conservative Civitas Institute found that nearly three quarters of North Carolinians feel that public schools do not receive sufficient funding from the state.  The rejected school bond is a missed opportunity for lawmakers to serve those constituents by simply allowing them to decide whether their own tax dollars should be used to provide the facilities needed for a twenty first century education.  These appalling priorities must galvanize voters to elect officials who are pro-public education in November.

The images below document some of the conditions facing North Carolina school children in their buildings. 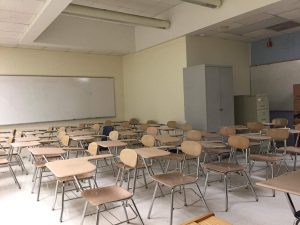 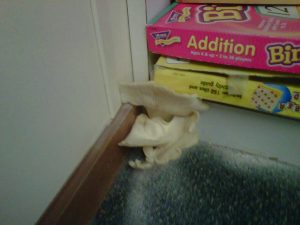 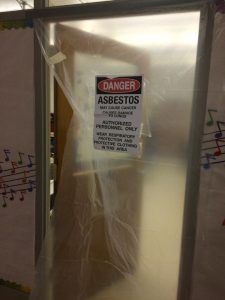 Door to music room in Winston-Salem/Forsyth County school, work in progress during the school year 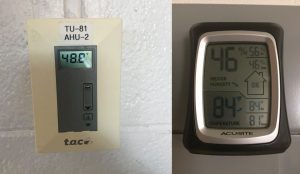