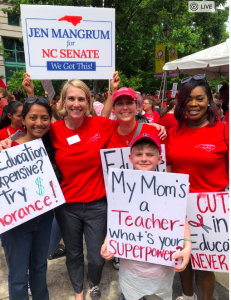 Recently I had the pleasure of talking with Jen Mangrum, a UNC-Greensboro professor in teacher education and first time candidate for office who is running for the Senate seat currently held by the most powerful man in North Carolina–Senate President Pro Tempore Phil Berger.

Jen told me what makes her tick, what concerns her about trends in education in NC, and how Phil Berger’s rise to holding a virtual monopoly on political power has weakened democracy in our state.  I offer up much of our conversation here in the hopes that it will be useful as North Carolina voters educate themselves ahead of our most critical election in years.

Jen always knew she wanted to be a teacher.  She was raised by two educators–her mom was a kindergarten teacher who taught Jen through her example to be ready to stand up for what you believe in.  Early in her career she fought for female teachers to have the right to wear pants to work since she often found herself sitting on the floor with her students.  Another time, there was a child in the community named Buddy who had cerebral palsy, and the school’s administration didn’t want to place him in a mainstream classroom because of the difficulty dealing with his special needs.  Jen’s mom fought for him to be allowed to be part of her class. He was admitted and later became a pediatrician.

Jen’s father was a career Marine, fighting in World War 2, Korea, and Vietnam.  He retired in 1967 and decided to become an elementary teacher, earning first his GED, then his associate’s degree from the local community college, then graduating from UNC-W and becoming a fourth grade teacher at high-poverty Bell Fork Elementary in Onslow County.

When Jen’s mother was 49, she was getting ready for school one day and had a massive heart attack that ended her life.  Not knowing where to go when her father left in the ambulance, Jen went to school. She knew that her teachers cared about her and that it was a safe place to be.  It comes as no surprise that a child who would seek out her teachers on the worst day of her life would later feel called to become a teacher herself. 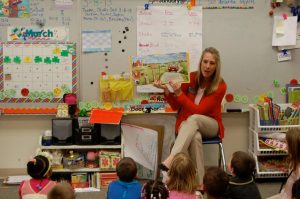 Jen’s favorite part about teaching is being part of the community and being close to the families that she serves.  She loves staying connected with those students and families over time and seeing years later the adults that the kids she taught in third grade have become.  Her belief that education has the power to lift people up and transform their lives is a big part of why she’s so troubled by trends in North Carolina’s public education system under the current supermajority and under the Senate leadership of Phil Berger.

Many of the problems we see in public education today can be traced back to the No Child Left Behind Act, which ushered in our current era of high stakes testing, shifted the way teachers worked, and paved the way for the privatization of education.  Jen notes that when there is money to be made, it changes the primary goal to pursuit of personal profit. Public education is the heart of democracy, and our goals need to remain preparing students to be informed citizens who are in a position to lead happy, high quality lives.  Instead, we have a current system in our state where we stigmatize schools that suffer from high poverty as failing schools, then move to turn them over to private, for-profit entities instead of trying to deal with the root causes of poverty. We have high teacher turnover in our state and continue to struggle to attract students to our universities’ teacher preparation programs.  We’ve long since lost the status we once held as a national leader in public education.

In terms of her opponent’s role in the downward trend we’ve seen in education in North Carolina, Jen points out that Senate President Pro Tempore Phil Berger holds all the cards, and everyone must fall into line behind him by virtue of his position or risk his wrath.  Because of the power in his authority to bring bills to the floor, Berger is able to single-handedly prevent legislation from moving forward, even if every single member of the Senate is in favor of it. For example, NC Senator Jeff Jackson has attempted to close a loophole unique to North Carolina law which prevents individuals from revoking consent after a sexual act has begun, even if the encounter becomes violent.  It’s a common sense move that should have broad, bipartisan support.  Although nobody has specifically come out in opposition to the bill, it has mysteriously stalled in the Senate Rules committee.  When interviewed by the Fayetteville Observer last year after Jackson’s third attempt to amend the law, Senator Berger said, “There are a lot of times that folks will come to us, and want us (to) ‘Change this law now!’  And I just don’t know that’s the way we need to respond to things when you’ve got a period of 30 years where apparently the law has been unchanged, and no one has brought this to anybody’s attention. At least, I’m not aware of it.”  No one except for maybe Jeff Jackson. Three times.

In the most recent short session, proponents of public education were eagerly waiting for the General Assembly to take up a proposed $1.9 billion school bond for inclusion on the November general election ballot.  The bond would have helped address $8.1 billion in statewide capital needs identified by the Department of Public Instruction in 2015-16.  It enjoyed bipartisan rank and file support and sponsorship by chairs of education committees in both the House and the Senate. Again, Phil Berger would not allow the legislation to move forward.  It’s incredibly frustrating that one individual who doesn’t share the values most of us have can prevent much-needed progress, but Jen reminded me that voters ultimately decide whether he keeps that power or not.

In terms of her own vision for education in North Carolina, Jen supports paying teachers fairly to demonstrate that we value public education in our state. She would like to see masters pay reinstated as well as the full Teaching Fellows Program which was eliminated by the General Assembly in 2011.  She would like to see a reduction in the testing volume which is currently not developmentally appropriate and narrows the curriculum, leaving less time and attention to the arts, the sciences, and social studies in the elementary grades. She supports moves toward determining the success of our schools using multiple measures, trusting teachers as professionals and giving them the creative freedom that they need to do their jobs.  Jen wants to see North Carolina known nationally for its birth to pre-K, k-12, and higher education continuum and believes that electing pro-education legislators is the key to seeing that transformation come true. 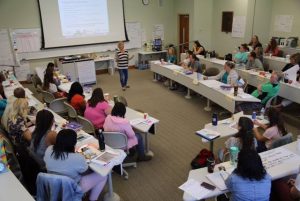 There is so much at stake in the 2018 election.  We need to vote for candidates who believe that public education is the cornerstone of building the society that we want in North Carolina.  But as we look for candidates who meet that description, it’s equally important that we carefully review the work of our current leaders and decide whether or not we want to take away their power.  In the case of future Senator Jen Mangrum, voters are in a position to both elect the strongest pro-education candidate imaginable and remove the greatest obstacle to progress in our state.

Interested in supporting Jen’s campaign?  You can find her donation page here.