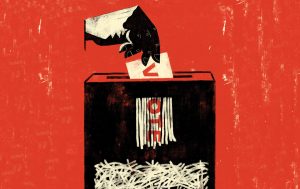 The six constitutional amendments on North Carolina’s general election ballot in November range from absurd (protect the already-protected right to hunt and fish) to downright dangerous (enable court packing by the General Assembly).  But none threaten our state’s democratic processes more than the Voter ID amendment.

The Fifteenth Amendment to the United States Constitution states that “The right of citizens of the United States to vote shall not be denied or abridged by the United States or by any State on account of race, color, or previous condition of servitude.”  After this amendment was adopted in 1870, poll taxes were instituted in most of the Southern states–including North Carolina–to keep African American citizens who couldn’t afford to pay them from voting. This system remained in place until the 1960s.

Fast forward to 2018.  Sensing their eight-year stranglehold on power is drawing to a close, North Carolina’s GOP supermajority is embarking on another attempt to disenfranchise African American voters.  The Voter ID amendment requires a majority vote and would “require voters to provide photo identification before voting in person.”  If the amendment is approved, the General Assembly will determine what sort of ID is acceptable when it reconvenes on November 27.

Supporters of Voter ID laws often cite the need to curb rampant voter fraud.  However, a 2017 audit by the NC State Board of Elections found almost no such fraud existed.  The audit showed only one occurrence out of nearly 5 million votes cast in the 2016 general election in which the vote would have been prevented by requiring photo ID.  In that case, a woman voted for Donald Trump on her deceased mother’s behalf because her mom was a huge Trump fan and had passed away just days before the presidential election. 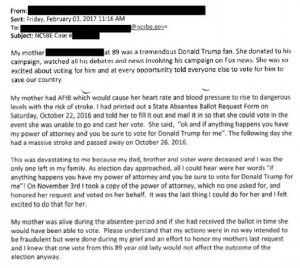 Apart from being completely unnecessary, the biggest problem with the proposed Voter ID requirement is that it will function as a 21st century poll tax to silence African American votes–which is precisely its intent.  A report from the Budget and Tax Center says that 1 in 20 voters in Mecklenburg County don’t have a DMV-issued ID.  African Americans constitute 33% of voters in Mecklenburg but make up 50% of voters who lack ID.  The cost of securing ID is estimated at about $100 including lost wages, travel, and associated fees.  That cost will be borne largely by people of color who can least afford it. How many will opt not to vote when faced with a choice between casting a ballot and putting food on the table?

This is not the first time the current GOP supermajority has used Voter ID to try to disenfranchise African Americans.  In 2016, a federal court struck down 2013 election reforms passed by the North Carolina General Assembly, ruling that they were “enacted with racially discriminatory intent.”  The court’s ruling stated that the legislation–which included strict photo ID requirements–targeted African American voters “with almost surgical precision.”  That court battle cost North Carolina taxpayers approximately $11 million, and we’ll be the ones paying for the next battle as well if this amendment passes.  On November 6, North Carolina voters need to be sure that this 21st century poll tax is defeated.