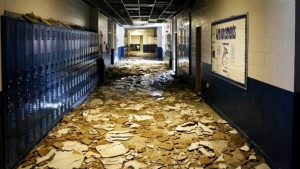 As campaign season hits the home stretch, Senate President Pro Tempore Phil Berger is trying desperately to polish a turd.  He’s claiming that he’s showed his commitment to North Carolina’s teachers and students through textbook spending (whoops–down 45% from peak levels in 2009-10) and per-pupil expenditures (umm, 25% below the national average, currently ranks 39th in the nation). 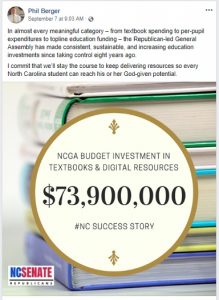 But as school districts in eastern North Carolina begin to assess catastrophic building damage following Hurricane Florence and teachers all over the state try to focus students in classrooms with no air conditioning, there’s one turd that voters really need to remember.

When the General Assembly’s short session began last summer, proponents of public education were eagerly waiting for lawmakers to take up a proposed $1.9 billion school bond for inclusion on November’s general election ballot.  The bond was the result of a broad grassroots effort which mobilized after the NC Department of Public Instruction’s 2015-16 Statewide Facility Needs Survey identified $8.1 billion in capital needs.  It also followed the subsequent passage of a class size mandate which will soon require many additional classrooms across the state but provides no funding for those classrooms.

The Public School Building Bond Act of 2017 had bipartisan rank and file support in both the Senate and the House, and it enjoyed sponsorship by Senate Education committee chair Michael Lee and House Education committee chair Craig Horn.  Yet despite the overwhelming need and bipartisan support, Phil Berger determined the public should not have the opportunity to decide whether it’s in our children’s best interest to relieve overcrowding and renovate crumbling schoolhouses.  Berger told sponsors of the Senate bill that the legislation would not be moving forward, and the General Assembly instead focused on drafting constitutional amendments which would drive conservative voter turnout–a last ditch effort to hold onto the GOP supermajority.

North Carolina residents deserve to be represented by those who put the needs of our children ahead of their own accumulation of wealth and power.  In June, a poll by the conservative Civitas Institute found that nearly three quarters of North Carolinians feel that public schools do not receive sufficient funding from the state.  The rejected school bond was a major missed opportunity for lawmakers to serve those constituents by simply allowing them to decide whether their own tax dollars should be used to provide the facilities needed for a twenty-first century education.

There is so much at stake in the 2018 election.  We need to vote for candidates who believe that public education is the cornerstone of building the society that we want in North Carolina.  But as we look for candidates who meet that description, it’s equally important that we carefully review the work of our current leaders and decide whether or not we want to take away their power.  As the most powerful politician in North Carolina, Senator Phil Berger has demonstrated time and again that his priorities are to give tax cuts to the wealthy, encourage privatization of education, and starve traditional public schools of the resources we need.  Remember that when you vote next month.