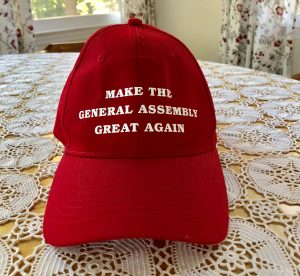 The general election is tomorrow, and both voters and nonvoters will decide whether the Republican party’s supermajority in the North Carolina General Assembly continues for another two years.

Thanks to extreme gerrymandering in our traditionally purple state, North Carolina Republicans currently hold 74 seats to 46 Democrat seats in the House and 35 seats to 15 Democrat seats in the Senate.  As a result, they can pass any bill they want and override Governor Cooper’s veto. This lack of balance has led to a far-right agenda since 2010 which includes the de-prioritizing of public education, unprecedented and illegal racial gerrymandering, a consistent lack of transparency and healthy debate, and so many power grabs they barely constitute news any more.  It’s been ugly, but that could be about to change.

In order to break the supermajority, restore the Governor’s veto, and bring back some semblance of balance and normalcy to our democracy, Democrats need to add either four seats the House or six seats in the Senate.  That’s completely within their means, but it depends 100% on who votes.

Preliminary indications from early voting are largely positive for Democrats.  Ironically, that could be a problem.

Travel back in time two years to the run-up to the presidential election of 2016.  Prognosticators were declaring Hillary Clinton the first female president of the United States and chiding Donald Trump for the inflammatory campaign rhetoric that had supposedly cost him any real chance at winning the presidency.

Now remember sitting in front of your television on election night, watching states turn red one by one on the map.  Ohio. Florida. Pennsylvania.  Wisconsin. Michigan. Recall the nauseating sense of horror you felt as the reality of a Trump presidency settled in.  Reflect on the last two years of that presidency and what it has meant for our country and the world. The horrible cabinet appointments.  The Muslim ban. Charlottesville. The transgender military ban. Constant demonization of the press and resulting violence by his supporters.  Migrant family separation. Weekly embarrassment on the international stage. The list goes on and on.

I have bad news for anyone who sat out the 2016 election:  You are just as responsible for the Donald Trump presidency as those who voted for him.

This summer, Pew Research released a very thorough survey of the 2016 electorate.   The survey looked closely at demographics of registered voters who did not participate in the presidential election.  Results show clearly that nonvoters were made up more heavily of folks who, had they voted, would have been likely to lean away from Donald Trump (young people and nonwhite voters, for example). 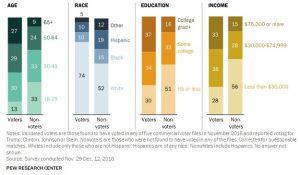 There may have been a lot of different reasons why people didn’t vote in 2016, but one of them was no doubt a sense of media-fueled overconfidence leading to the belief that Clinton already had the presidency in the bag and there was no need to get out and vote.

Fast forward to 2018 in North Carolina.  For months, Democrats and their supporters have been talking about an impending blue wave sweeping our state.  Turnout in early voting is up substantially over the 2014 midterm election, including among voters ages 18-29.  But at the same time, there’s still a danger that the overconfidence that kept voters away from the polls two years ago could strike again on election day and preserve the GOP supermajority that has turned North Carolina into a national caricature.

Please do not take the results of this year’s election for granted.  If you did not vote early, look up your polling place’s address by visiting this convenient link.  Make your plan for when you’re going to vote tomorrow between 6:30 AM and 7:30 PM.  Vote before work. Pack a sandwich and go on your lunch break. Stop by on your way home in the evening (anyone who is in line at 7:30 will be permitted to vote).  But, whatever you do, please, please, please, do not sit this one out.

Help us make the General Assembly great–or at least not a total disaster–again.

(Hat tip to my friend John deVille for the custom hat!)