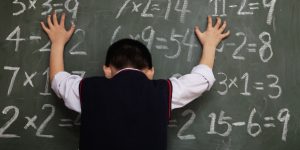 New research has established a physiological link between levels of stress prompted by high-stakes standardized testing and performance on those tests.  Researchers at Northwestern University, Texas A & M, and the Naval Postgraduate School found that the more economically disadvantaged students were, the more likely it was for their test results to be negatively impacted by test-induced stress.  The results call into serious question the wisdom of using standardized test scores as a primary measure for school achievement and as a critical driver of education policy.

Researchers measured levels of cortisol–a stress hormone found in saliva–to arrive at their findings.  They found that, during standardized testing, levels of cortisol increased an average of 15% over non-testing weeks.  Comparing results on the exam with other academic measures, they were able to document that those with the largest changes in cortisol levels scored much lower than expected on the exams.  Students living in the highest-poverty and highest-crime neighborhoods demonstrated the largest swings in cortisol. Researchers surmise that those changes in cortisol levels disrupt concentration and lead to disengagement with the testing environment.

This study has important implications for education policy everywhere, but particularly in North Carolina.  Our state relies heavily on standardized testing results to determine so many things: sizable teacher bonuses, placement in advanced courses (which can alter a student’s life trajectory), school report card grades and more.  Despite overwhelming community opposition, the NC State Board of Education is currently considering the addition of Wayne County’s 90% economically disadvantaged Carver Heights Elementary to the Innovative School District, a program which takes control of schools with chronically low standardized test scores away from the state and gives it to charters and other private organizations.  The school has earned an ‘F’ school report card grade for the last three years based on high-stakes testing results.

We’ve got to stop using one flawed measure that disadvantages students of poverty to drive so much of our policy.  Any good classroom teacher will tell you that broad and varied measures lead to the most accurate picture of student ability.  It’s high time we started using that approach at the state and federal levels as well.